*This post contains sponsored content. Though we were compensated with product, all ideas and opinions are 100% our own! We chose to be Brand Reps for CeCe Caldwell because we love her products!

Truth be told I’ve been envisioning this Beachy & Neutral Union Jack piece for about a year. Last fall, Meg and I participated in a Holiday Bazaar put on by the Fort Leavenworth Spouses Club in Kansas. It was our first big craft fair and we wanted to open with a bang, so when we were talking about an “attention grabber” for our booth, I knew what I wanted to do.

Then the stars aligned and a super sweet & special customer emailed us with pictures of some dressers she was selling before her PCS (Permanent Change of Station : Big Move!) to Korea and I saw exactly the piece I had been waiting for.

Swoon! Isn’t he gorgeous? Okay, well he would be. You can’t see it very well in the pictures but there are these deep crevices all along the sides of the dresser which I knew would look fabulous with a heavy distressing. Being that my entire house is white, beachy, cozy, neutral colors and teals I was sure he would be pretty handsome as a coastal style piece (and would fit right in….which means I wouldn’t have to sell him! And my husband would have no leg to stand on with that argument). I started by wiping down the entire piece with a rag and pulled out my CeCe Caldwell Natural Chalk + Clay Paint in Simply White. Then…..something that I didn’t plan for happened. The dreaded BLEED THROUGH!

If you’re a painter, you know what I’m talking about. You’re inspired, you’re cruising along on your project – probably listening to Adele or Mumford & Sons, then all of a sudden it looks as though your dresser is actually bleeding. Somewhere along the life of this little guy he had encountered some water damage. The only remedy for this is a high quality primer such as KILZ and in my case, many MANY layers of it. The good news is that the primer color I chose was white, which made painting the Simply White on top of that really easy. The bad news was that I wasn’t going to be able to distress it as heavily as I had intended because when you distress you remove the primer, therefore getting rid of the protective layer preventing more bleed through. Womp womp.

This is after 3 layers of Kilz and 2 coats of Simply White. Finally, I was ready to gather my supplies and pour a glass of wine to prepare myself for all the math that is required for painting the Union Jack, something I am admittedly horrid at. So naturally I called my smarty pants husband downstairs to help me check my measurements, he in turn was horrified at how awful I am at math (and how artistic my brain truly is) and I trucked on. Did I mention I chose to complete this project at 11pm, the night before I was hosting 20 ladies at my house? Masochist? Maybe. Crazy? Definitely. I mean, I couldn’t have people over with an unfinished Drink Station!

I decided to divide and conquer so I started with just the wide center cross. The thing about the Union Jack, if you look closely at it, is that it is actually made up of three separate crosses : Saint George’s Cross, Saint Andrew’s Cross and Saint Patrick’s Cross. These three separate crosses have special meaning to the British and making sure you do it correctly is not only respectful but ensures it actually looks like the Union Jack. For the colors of the Union Jack itself I chose CeCe Caldwell’s Seattle Mist and remember how we are trying to use up our other paints because we love CeCe so much? This was the perfect opportunity to use up the rest of my Duck Egg Blue. Look at how yucky this was :

Yes, people – that is RUST. And if you look closely, rust is in my paint. I just don’t have time for that. I was so happy to throw this can away when I was done and not have to deal with that again! It really sealed the deal for me when I got to use both paints, one after another, and really see the difference in the quality and texture of the paint. After taping, re-taping, painting, re-taping, taping (you get the picture) I was finally ready to distress and seal him.

Instead of reaching for my go-to Waxing Cream, this time I was excited to whip out my brand new Endurance, which is a non-yellowing polyurethane finish specifically designed for tabletops. This would be super important since this piece is a drink station, potentially opening it up to water/coffee/wine/whiskey spills. And can I just say – wow! I love this stuff and my arm was super excited to get a break from all the buffing that waxing requires. I just grabbed a clean, natural bristle paintbrush and painted it on! After 2 hours, I lightly sanded the entire piece with fine grit sandpaper and applied a second coat. I found my all time favorite cup pulls at Home Depot and quickly housed my Keurig, bourbon and wine on top of it.

I’m still looking for a vintage bottle drying rack to mount on the wall to the right of the drink station and display my coffee cups on, but for a 24-hour project I think this turned out pretty great! The beachy colors really compliment and bring out the sunflowers in my favorite family picture above the dresser that was taken in Kansas by the incredible Rebecca DeLoach Photography  – she’s now in Southern Pines, North Carolina so check her out if you’re in the area (and yes, I have since centered the dresser under the picture! It was late!). 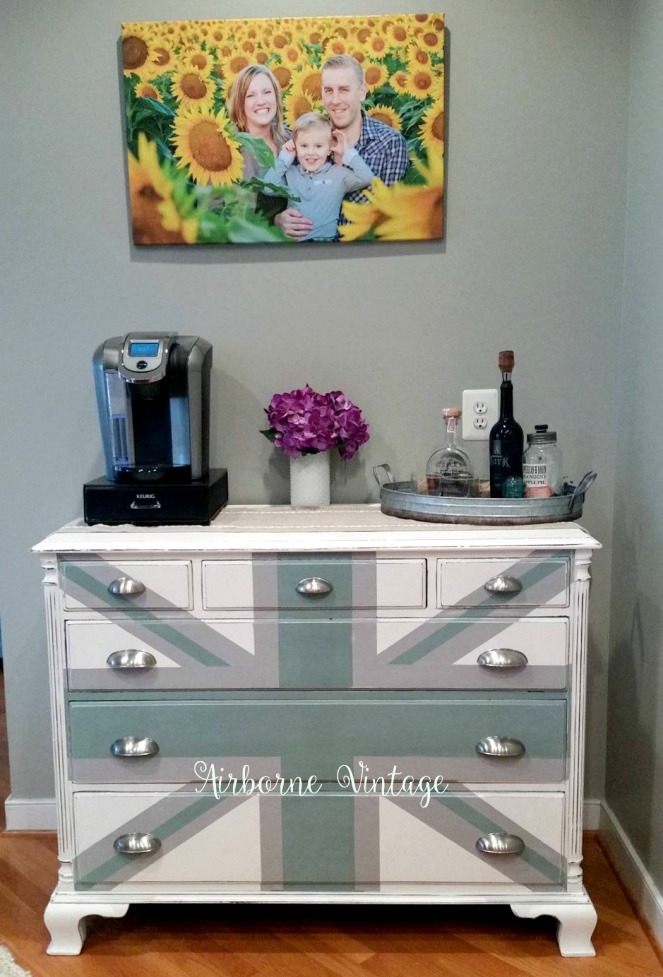 Let us know what you think in the comments below! Do you have a drink station in your home? What goodies would you stock yours with?

P.S. I may have put my feet up after completing this project 😉